May be it is not as bad as it seems The two sisters came in looking for something for their dad. From their conversation with each other, one could make out that their dad was not keeping well, was stubborn and inflexible (like some seniors who have been fiercely independent all their lives are wont to be), but still very much loved.

The sisters, one resident and the other visiting, were carrying on a banter about the dad’s shenangans with a subtext of indulgent smiles, crinkled noses, shrugs and sighs. One could see that despite the obvious love and affection they had for their dad, their nerves were frayed and their patience was wearing thin.

As they were browsing, Mr. S came in. Mr. S is 70+ and an old customer. He had not visited since his mother had passed away a few months back. He looked a little thinner and a bit more harried. I enquired politely about how life was treating him. A casual question, but it must have been the key to the flood gates, for there was such an outpouring for the next few minutes.

Apparently, he had had a mild heart attack and had undergone an angioplasty since he last met us and was just recovering. As though that was not sufficiently taxing, his father-in-law had moved in with him as he had been recently diagnosed with some malignant form of cancer. The F-i-l was apparently largely confined to bed now and needed constant looking after – the usual diaper change and feed and all the other help in taking care of his daily living – not to mention sleepless nights and visits to the doctor involving interminable waiting times. Poor Mr. S, not only did he have to take care of himself, he had an even older man to look after. No wonder he looked harried. I could not do much more than mumble some inane platitudes about keeping up the spirit and how things will work out well in the end and so on. He sighed, bought some diapers for his father-in-law and left.

The two ladies who had fallen silent in Mr. S’s presence seemed to come out of a trance. “Wow! We are in a much better state than that poor man. We have no right to complain”, they said and left the store in a much better frame of mind.

I only hope they remind themselves of this every time things get more difficult. As for Mr. S, I can only wish him good health and the strength to endure and survive this trial too. 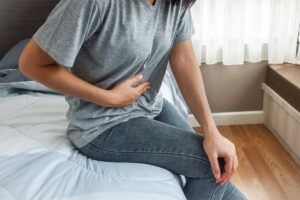